Obsessed with teaching his victims the value of life, a deranged, sadistic serial killer abducts the morally wayward. Once captured, they must face impossible choices in a horrific game of survival. The victims must fight to win their lives back, or die trying...

Who Stars in Saw

Though I tend to go for both older films (those made before 1970) and especially so when it comes to the horror/thriller genre, I saw parts 3 and 5 upon theatrical release (yes, I know it's really not right to see film series out of sequence but I simply don't care) and they were intriguing and decent, don't ask me why. Now that I both date a horror film aficionado and my 13-year-old son himself is one as well, I have decided to check out the contemporarily well-received original (I may decide now to see the entire series, and in order, but really who's to say?). Instantly, such trusted, bankable actors as Cary Elwes and Danny Glover give it credibility, just as Bette Davis and Joan Crawford gave such films as 'What Ever Happened to Baby Jane?' way back in days gone by. This was much better than I felt parts 3 and 5 were, by the way.

Part of the Saw Collection 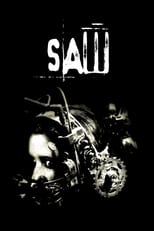