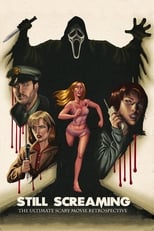 A year in the making, Still Screaming is the definitive documentary on the making of the iconic Scream movies. Dive into the fascinating success story of the classic trilogy with on-set footage and photos, and dozens of brand new interviews with cast and crew from all the films including Wes Craven, Neve Campbell, Liev Schreiber, Henry Winkler, Matthew Lillard, Jamie Kennedy, Laurie Metcalf, Parker Posey, Scott Foley and many others. Written and Directed by Ryan Turek and Produced by Anthony Masi.