All Movies With subway-train Keyword

Armed men hijack a New York City subway train, holding the passengers hostage in return for a ransom, and turning an ordinary day's work for dispatcher Walter Garber into a face-off with the mastermind behind the crime.

The photographer Leon lives with his girlfriend and waitress Maya waiting for a chance to get in the photo business. When Maya contacts their friend Jurgis, he schedules a meeting for Leon with the successful owner of arts gallery Susan Hoff; she analyzes Leon's work and asks him to improve the quality of his photos. During the night, the upset Leon decides to wander on the streets taking pictures with his camera, and he follows three punks down to the subway station; when the gang attacks a young woman, Leon defends her and the guys move on. On the next morning, Leon discovers that the woman is missing. He goes to the police station, but Detective Lynn Hadley does not give much attention to him and discredits his statement. Leon becomes obsessed to find what happened with the stranger and he watches the subway station. When he sees the elegant butcher Mahogany in the train, Leon believes he might be a murderer and stalks him everywhere, in the beginning of his journey to the darkness.

The camera platform was on the front of a New York subway train following another train on the same track. Lighting is provided by a specially constructed work car on a parallel track. At the time of filming, the subway was only seven months old, having opened on October 27, 1904. The ride begins at 14th Street (Union Square) following the route of today's east side IRT, and ends at the old Grand Central Station, built by Cornelius Vanderbuilt in 1869. The Grand Central Station in use today was not completed until 1913.

A man tries to track down a potential love interest on a crowded train using a smartphone app. 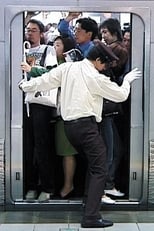 On a Wednesday Night in Tokyo

A regular Wednesday night in Tokyo's subway. The train is filled with more and more people...